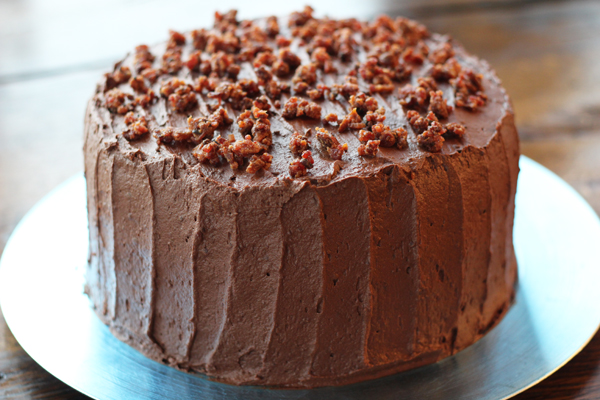 For all the bacon lovers out there, this Double Chocolate Bacon Cake is for you. It is an easy cake to make that’s indulgent and ridiculously delicious. The batter is made chocolatey with cocoa powder, while the use of coconut oil and Greek yoghurt in place of butter gives the cake a texture that is tender, dense, and rich, all at the same time. It reminds me of pound cake, but without the butter. The frosting is just two ingredients: chocolate chips and heated whipping cream that you whip fast into fluffiness. 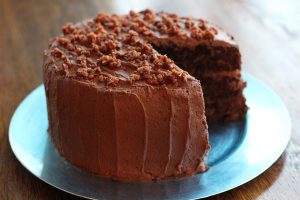 To make this Double Chocolate Bacon Cake, you first bake brown-sugar -coated-bacon to a crisp in the oven. You crumble the bacon and mix it into a thick luscious batter. You end up also putting bacon crumbles on top as a finishing step. You can whip up the batter in minutes, then split it among three 9-inch round layer cake pans, which bake in about 20 minutes. It is a deceivingly simple recipe.

This is also the recipe that confirmed I should keep oven-baking my bacon instead of frying it on the stovetop. The technique of folded aluminum foil “tented” underneath works great. The bacon comes out firm and crisp—just as it should—without losing any flavor. 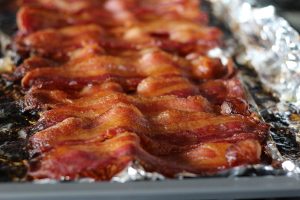 This cake’s taste and texture make it a show-stopper. It is also a conversation starter. I’m guessing people will either love it or leave it be. Admittedly, this cake won’t be everyone’s cup of tea but if you’re curious, give it a try. It’s a delight! All my taste testers where ecstatic about it. With a creamy and intensely chocolate frosting, along with bacon bits on top, one look at this cake had everyone drooling. This is seriously one of the best cakes I have ever tasted. It’s up there with the chocolate/coconut cake we also previously baked/shared. And for those out there who don’t eat meat, this cake tastes great even without the bacon. 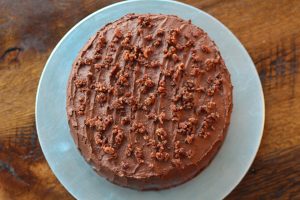 I can still remember the first time I had chocolate-dipped bacon. It was of course at my local fair, the Minnesota State Fair, where many fantastic food trends are always on display. Between that tasty treat—which was on a stick of course–and the “Showgirl” menu item menu at Glam Doll Donuts (in Minneapolis), I knew I would like this cake also. I didn’t expect to love it! Yay!

Acknowledgement goes to Kevin Clower for this recipe. His “Miss Piggy’s Surprise Chocolate Cake” which won at the San Diego County Fair 10 years ago (2011), was what inspired my Double Chocolate Bacon Cake. Kevin placed 2nd in a King Arthur Flour cake contest with his creative cake. The main change I made from Kevin’s recipe: I used coconut oil versus butter and added Greek yoghurt. I also changed up some methods and directions.

I hope you make this cake! It’s a winner!