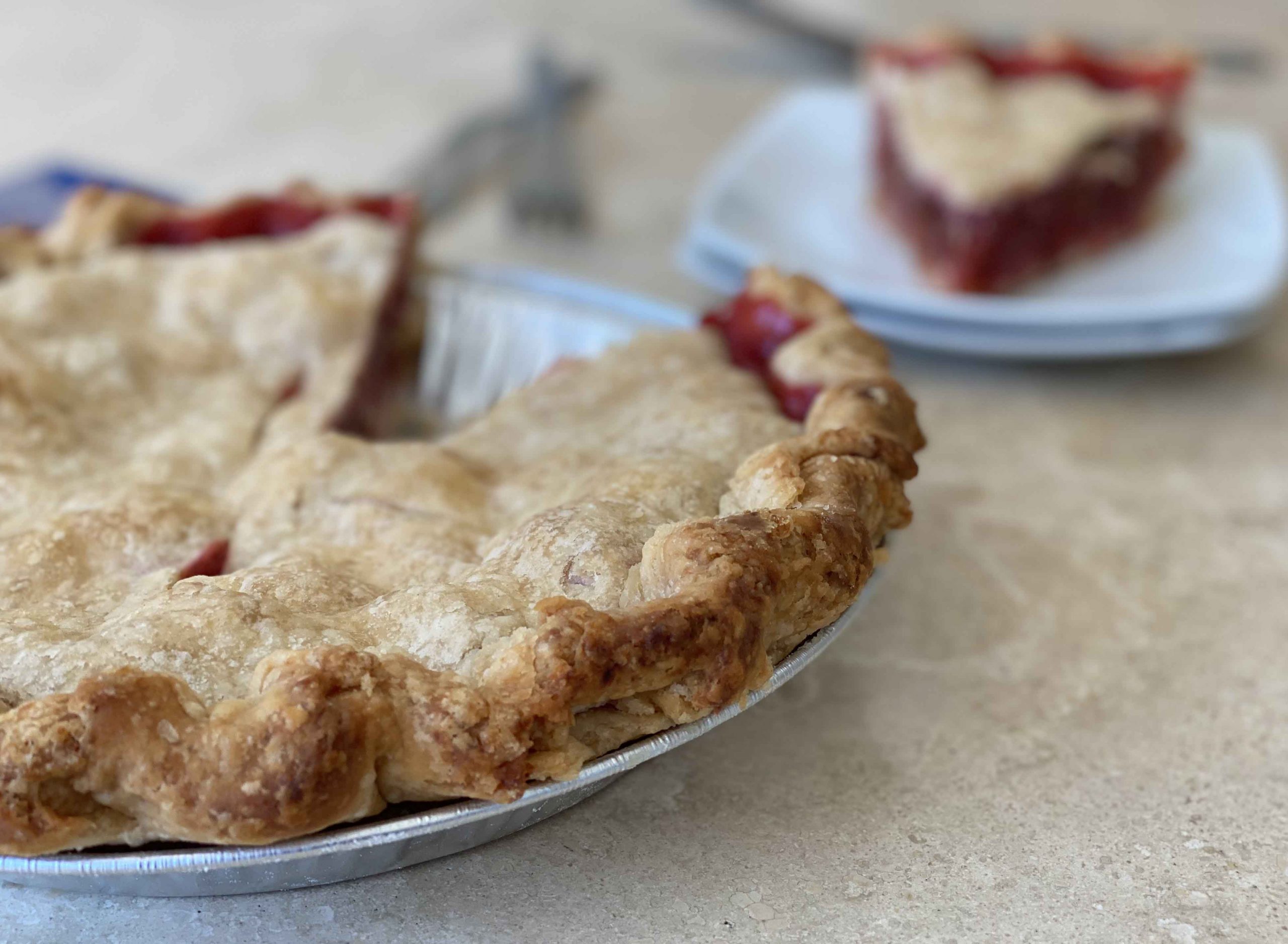 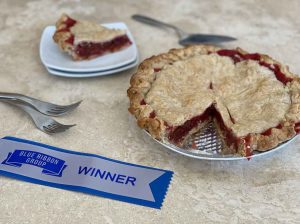 Read on for some insights direct from Kathleen with our Winner Q&A:

What is your secret to baking great pies?

For me, the secret to a great pie is having a great crust. I love my family’s recipe, and rarely bother to use anything else, but (a perfect pie crust) is fairly tricky. It took me a number of years and at least a dozen pies to actually get the technique right, as judging exactly how far to cut the shortening into the dry ingredients took practice. To me, the effort is worth it because it tastes so good. We’ll sometimes bake the crust on it’s own with a bit of cinnamon sugar and eat it like cookies.

What can you tell me about your strawberry rhubarb pie and how the recipe came to be?

I first made this pie at the request of my father-in-law. I asked him what dessert he would like me to bring for a Father’s Day celebration, and he said that strawberry rhubarb was his favorite. After a quick google search, this one looked the best to me, as it had the least amount of sugar and he mentioned liking a tarter pie. I then doubled the cinnamon and substituted my family’s pie crust.

Do you have any helpful tips for someone making your recipe?

The trickiest part is the crust. Cutting the shortening to the size of small peas is important. A pastry cutter is faster, but it is possible to do this with a fork as well, as I did that for years. Leaving time to chill is also important, if you don’t rolling out will be more difficult. 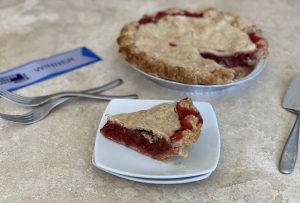 Presentation is important. What are some of your tricks?

If I’m honest, I’ve always focused on taste first, presentation second. People will ooh and aah when something looks pretty, me included, but they only come back for more if it tastes good. Once I’m happy with the flavor, my next goal is usually to make it neatly, though sometimes I can’t even manage that. I almost didn’t turn this pie in because the juices burst through, but I figured it couldn’t hurt to try. And I won despite the untidiness!

What is the worst disaster you have had in the kitchen and how did you deal with it?

My family has a recipe for an apple cake with fudgy frosting that’s to die for. My mom had always made it as either a bundt cake or in a 9×13 pan, but I decided to try making it as a three layer cake. The first layer came out fine, but I didn’t leave time for the frosting to set before turning out the second layer, and the cake itself was too loose to hold together anyway. It was just this mound of broken cake and gloopy frosting. Unfortunately, I was making this cake for my sister’s birthday party, and didn’t have the time or ingredients to make anything else. Instead I just shoved some candles on top and apologized. Everyone at the party had a huge laugh, as this was by far the ugliest thing I had ever baked for them. Still tasted great!

Who does most of the cooking in your home?

I am both the cook and baker in my home, though both of my children are very interested in what goes on in the kitchen, particularly my son.  There are times that I’m rushing to get dinner on the table, and it just doesn’t work to have a three year old helping.  I have to promise him that he can help me make a dessert after we eat, and then he’ll happily mix together a box of pudding for us to enjoy.

What are some of your favorite family recipes?

I’ve always loved my mom’s apple pie, which is funny because she thinks it’s nothing special. She also makes a wonderful chicken salad and beef stew. For myself, I have a chocolate chip cookie recipe that I love, and there’s peach and apricot pie I’ve made that gets really great reviews. This summer I’ve been experimenting with fancy burgers, and I also once made a beef Wellington that had the flavors of Rouladen that was particularly superb. 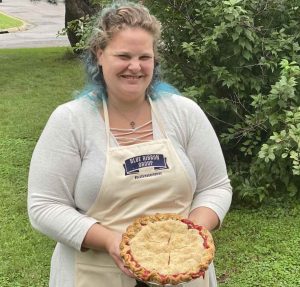 What advice would you give young people wanting to cook/bake more?

The biggest advice I can give is to read the recipe all the way through!  More than once, I’ve gotten stuck when I realize that a step I had just skimmed over was actually far more intense or difficult than I initially realized.

Also, it helps to have someone you can talk to about cooking, but who won’t step in and take over. I first really learned to cook during the summer after my senior year of high school. My parents told me that I was in charge of dinner on Tuesday nights. Inevitably, I would end up calling my dad 2-4 times over the course of the day to ask questions. What does this step mean? It calls for this cut of meat, but can I use this instead? I’ve watched mom make this before, but I’ve never seen her do this step, can I skip it?  I think he really looked forward to those calls, and both of my parents were very encouraging about the meals I made. I think I only needed to throw the whole thing out once and declare a pizza night instead.

What has been your biggest win in recipe competitions?

I think this blue ribbon is my biggest win to date.

What do you do for work?

Before the pandemic, I worked at the University of Minnesota in the Theater Department as a draper in the costume shop and as an adjunct professor. Lockdown decimated the theater industry, so now I am back in school working on my Initial Licensure/M.Ed degree for English Education.

Other hobbies besides baking?

I don’t have much free time between school and family, but I like to sew, particularly cross stitch.